The power of momentum 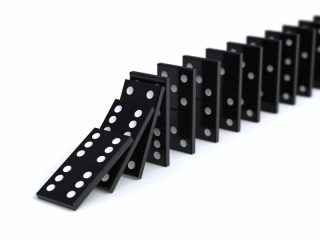 Monday, May 13, 2013 will go down in sports folklore as one of the all-time incomprehensible chokes, if you’re a Toronto Maple Leafs fan — or as one of the all-time greatest team comebacks, if you’re a Boston Bruins fan. (For non-hockey fans, the Maple Leafs blew a 4-1 lead in the final period of the seventh and deciding playoff game. After scoring halfway through the third period to make the score 4-2, the Bruins pulled their goalie with two minutes remaining and scored two more goals to tie the game. The Bruins went on to win the game in overtime.)

Pat Quinn, a former Toronto Maple Leafs coach, described it as the terrifying moment that most athletes experience at some point in their careers: when momentum shifts to the other team at such a fierce rate that the impending collapse actually becomes predictable — the awful moment when a coach looks at his team’s bench and only sees players fearful that they’ll be selected to go onto the ice. Most people who watched this game shared this sense of impending doom (or elation, again depending on your perspective), well before the outcome of the game was actually determined.

Change-management projects can also be affected by shifts in positive and negative momentum. It’s the reason that most change efforts stress the need to demonstrate some “quick wins” early in the engagement. The deliberate and careful staging of prototypes serves a similar purpose. These quick wins or successful trials give people the strength to believe that things might actually get better. The magnitude of the early results is much less important than the decisiveness and clarity of the improvement. Success can become an expectation, which can be very powerful in building a broad base of support for change. Conversely, miscues and mistakes early in a change-management project (e.g., poor communication, errors, conflicts between people) can do lasting harm. Doubt and pessimism can be just as powerful forces at changing momentum as belief and optimism.

Momentum shifts can happen at all organizational levels (company, department, team, individual). The advantage of a change-management initiative over many other circumstances is that it is a fresh start. Most people are willing to enter into a project — provided it is introduced well and seems reasonable — with a slightly optimistic sense that it could work. From this point on, however, the process is something that needs to be carefully orchestrated and managed.