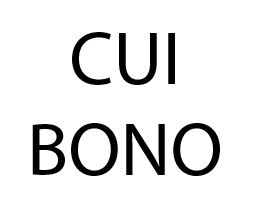 There’s a Latin expression that will resonate with anyone who has struggled to implement change in an organization: “Cui bono?” Commonly attributed to the Latin orator Cicero, it means “To whose benefit?” In a legal context, it insinuates that the guilty party can usually be found among the individuals who have something to gain from the crime. The adage speaks to understanding people’s motivations, which is obviously very important when trying to implement change in an organization.

In change-management vernacular, the expression that managers are more familiar with is “What’s in it for me?” (or WIIFM, as it’s usually written on management-training posters). “What’s in it for me?” implies that people naturally have their own best interests in mind, so when you’re trying to sell them on the virtues of changing what they do, you need to articulate why the change will be better for them. But it’s a mistake to stop there.

“What’s in it for me?” is similar but not the same as “To whose benefit?” — and the distinction is important. “What’s in it for me?” is asked by individuals trying to determine if the changes will either make them better or worse off personally. “To whose benefit” stems from individuals trying to determine who the changes are really going to benefit. Many people become cynical if a change is oversold as something that is designed to make them personally better off. It insults their intelligence if it isn’t at least balanced with how the change will also help the company, and perhaps leave them worse off in some ways. Many changes are not “win-win.” Often, something must be given up in exchange for something else that is hopefully better. So the key is to try to show why the net balance is better, recognizing the losses as well as trumpeting the gains. It’s more honest and, in our experience, it’s a more successful approach for most organizations.